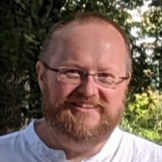 By Lars Fosdal, October 21 in Databases