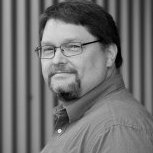 By corneliusdavid, October 28, 2021 in Cross-platform